I am excited as well as nervous about all this, but mostly thrilled. And even more happier that Patrick is doing this. He had been telling me for years now that he's wanted to do a film about me(about my art really) and I know he will do an out of this world job.  He showed me a 5 minute preliminary treatment from some test footage he took and I was already blown away. This documentary will be available on MTS On Demand and as well, Patrick plans on sending it out to film festivals. To top it off, Patrick's brother Greg Lowe (famed veteran musician, whom I did the artwork on his first Jazz CD cover back in 1991) will be creating original music for this flick.

Out in the spring. Stay tuned.

Posted by Robert Pasternak at 12:29 AM

November 2, 3, 4, 2012
Winnipeg Convention Center
I will be setting up my wares at this years CENTRAL CANADA COMIC CONVENTION here in Winnipeg this weekend. Check out all the convention details here .  Tons of media and ARTIST guests plus dealer tables galore plus Artists, Artists and more Artists. 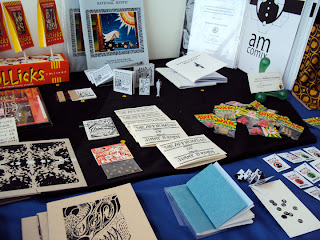 I will be showing some original work ( Godzilla and other SF ) as well as some new Acid Man Issues as well as some new novelty items including my After School Mini Loose Leaf Portfolios. And I mean MINISCULE. There is set of 8 sheets to a set and comes in a pocket sleeve folder with class label. Six different sets are available. Always more!

Posted by Robert Pasternak at 10:43 AM