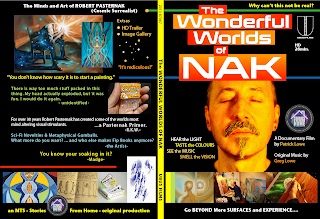 
Produced by MTS ON DEMAND for Stories From Home
Directed by Patrick Lowe
Music by Greg Lowe
HD 28 min.
" You know your soaking in it." - Madge - 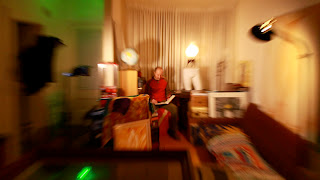 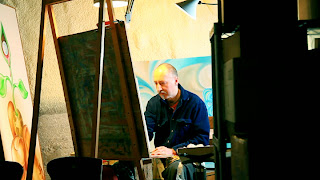 Guitarist Greg Lowe has been composing and performing in Winnipeg for over thirty years. He has released seven CDs of original jazz compositions and has had several works performed by the Winnipeg Symphony.  Locally he performs with the R&B supergroup the Ministers of Cool and tours often with the western swing cruner Woody Holler and his Orchestra. Focusing on composition as much as guitar performance, Lowe’s body of work has grown to include large orchestra, chamber ensembles, theatre, television, dance, radio musicals and dramas. www.greglowe.com

I first met Robert Pasternak in 1987, when he still had a studio at the Royal Bank building on Main Street. Entering the domain, I was overwhelmed with what felt like another dimension altogether. Wall to wall, the place was adorned with large, multi-coloured paintings exuding a psychedelic cosmos, of the cosmos, jigsaw pieces, giant hands, and all the paraphernalia of science fiction come to life. Yet in the middle of it all, was this Puckish, long-haired figure at his easel, calmly drawing away at his next piece, who looked up at me curiously, then quietly invited me to come inside and make myself at home. Needless to say, we've been friends ever since.

To really appreciate the impact Pasternak's universe had on me, one had to also understand what was then the definition of that overused term "Canadian Art." Still a gangly lad at 19, I had come to understand most of the painting that came out locally and nationally, as the stuff of naturalistic murals of the Group of Seven, or the more abstract works of Wanda Koop, the main product you will usually see in galleries. Of course, Canadian art is more complex and richer than that, but at the time, I was still under the impression that most of our country's paintings were things you either had to like (because the critics said so) or could only appreciate only on a higher intellectual plane, after you got your MFA. In other words, it may have been good for the museums, the arts councils, the critics, or the national gallery, but for an impressionistic youngster like myself hungering for something more visceral or enticing, you never thought of Canadian art as being, well, fun.

Fun, however, is what Robert Pasternak is all about… and then some. Festooned with visual puns, comic book vividness, interplanetary landscapes, and Daliesque surrealism, Pasternak's artwork doesn't demand that you appreciate them. Rather, they seduce and envelope your senses so easily and effortlessly that without knowing it, one is caught in the middle of this signature cosmos, overwhelmed by his technicolor visions and stunned by the craftsmanship. It certainly spoke directly to me. And the more I yearned to see, the more Pasternak delivered, with an amazing gallery of flip-books, comic strips, novelty items, films, and illustrations that seemed almost (corny as it sounds) infinite. Then again, that's just one of the many themes you'll find in this man's work, along with his pet obsessions with the metaphysical connections that exist around us all.  And in watching this documentary The Wonderful Worlds of Nak, you the viewer will see these connections come alive tying together all his work, from the larger scale works of Ages and Hundredth Monkey, to his hilarious take on consumerism, such as Sgt Smokes' Cigarette Butts or the Visual Chew Gumsticks.

Ironically, it was 25 years ago that I suggested to Robert the idea of doing a documentary on his work, which from time to time we would discuss but never get around to. Then in 2012, I decided it was time to put in a proposal to MTS's Stories From Home, which under the auspices of Cam Bennett, was giving local filmmakers the opportunity to tackle local subjects for MTS on Demand. And so it was that the Nak documentary came into fruition. Yet even with years of experience behind him, Pasternak admittedly was still puzzled as to how this documentary would come about. Apart from being in it, just what would it look like? How do you do justice to the visual universe of Robert Pasternak, beyond just a conventional talking heads doc, which seemed somehow inadequate in covering so much in just half an hour?

It's also embarrassing for me to admit that I not only had not done a documentary, but still hadn't made a movie digitally. That is, I was still stuck wanting to make traditional films- that is films cut and finished as 16mm prints- and couldn't wrap my head around the basics of high-definition and Final Cut Pro. Then to prove to both Rob and myself that this project was feasible, I did some rudimentary experiments with Rob's artwork on iMovie, as basic as possible, to just see what could be done. Suddenly, the paintings, comics, sketches, and novelty items came to life in a way I hadn't anticipated. Literally, each canvas or sketch took on a life of its own, creating its own sense of movement, music and rhythm. So it was that for the first time, I was involved in a film that somehow just made itself. Just add water and stir. Thus I was able to overcome my own inhibitions and bring the Nak universe into a life of its own.

So thanks to Robert's and my brother Greg Lowe's involvement, we have been able to piece together 28 minutes of jam-packed, multicoloured imagery, intercut with the images of the artist himself, either in front of his easel bringing a painting into fruition from scratch or trying to explain the forces that drive him on. And if at times Pasternak himself is overwhelmed by the connections and coincidences he sees around him, then chances are, so will you. Powered by Greg's rich musical soundtrack and the natural ebb and visual flow of Nak's imagery, The Wonderful Worlds of Nak takes the viewer on an odyssey into artwork that can enthral and excite viewers of all ages. Hopefully, you'll be as taken by Robert Pasternak's universe as much as I did, when that impressionable boy of 19 walked into the master painter's studio… and has loyally remained there, overjoyed by the wonders that have come from Pasternak's very own hands of creation.

Posted by Robert Pasternak at 11:57 PM 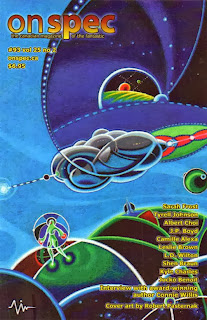 OnSpec The Canadian Magazine of the Fantastic
Issue No.93 Summer/Fall 2013
I just got my copy in the mail last week, though I think it's been out since July. They updated their website this past week as well with all the details - well, not all, as they do not mention a fantastic interview they did with me which I am quite happy with - 9 pages with some extra samples of art.
I hope to post the interview sometime in the future.
I am also pleased with how the color turned out on this cover. The vibrancy was not lost. It is also nice to see one of my older styles being utilized on covers again. I had stopped doing pencil crayon pieces some years ago but I recently started doing them again. It's a very different world.
Original Art - Spaceship Five - pencil crayon on paper - 9 x 12 inches
Posted by Robert Pasternak at 11:00 PM

A collection of poems by Andrew Vaisius 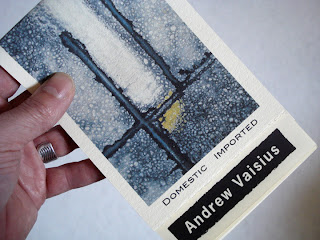 I have had the great pleasure to produce a book collecting a small sampling of poetry by my friend and fantastic poet Andrew Vaisius. I cannot believe that even though his poetry has been printed in countless literary publications as well as having reviewed hundreds of other peoples books and writings that this is his first ever book collecting his poetry.
I generally only make books containing my art, for myself, to varying degrees of technical might, man hours of assembling the large or few number of copies,  but I offered up this idea to Andrew to produce a chapbook of his poetry and this is the first time I have done this. I love how it turned out.
The cover for this volume reproduces a piece of art that Andrew chose from my "Ground" series and I created an original piece of artwork for the inside of the book that doubles as an art note card to send out to someone or an art print to frame or tape up to your fridge.... or you can even leave it in the book where it belongs so that it can appreciate in value for some future nest egg. 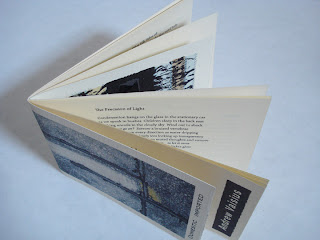 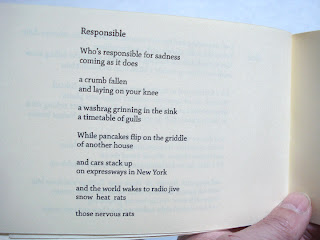 There are 18 poems collected within these 32 pages and there is a special numbered art card also included in each copy. The book measures 4.25 inches x 7 inches, so it will easily fit into your vest pocket or purse for your traveling pleasure. 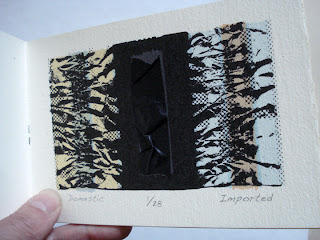 ***********
Come and help celebrate this event by coming out to
An evening of Sight and Sound......and Poetry
Friday, September 13th
7:30 pm
Winkler Library,  Winkler Manitoba
The original art for this cover will be on display along with many other pieces from this series & Paul Bergman will be performing some of his fantastic music and song!
.... and of course, Andrew will read from his new Book. 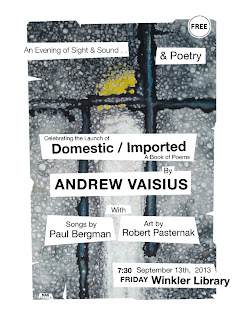 Posted by Robert Pasternak at 11:09 PM