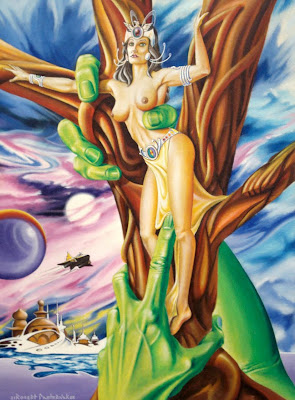 TREE OF ENVY  .  $3,000  .  acrylic on canvas  .  24 x 26 inches  .  1985  .   framed
I am looking to sell this painting of mine for the current owner who had originally purchased it in 1985 which is also the year in which it was painted when I had a studio at Forum Art Institute in the old CPR Station building.
When I saw the painting again I was struck by it's size and vibrancy of color. The photo I had been viewing all these years certainly was not as bright and I had become accustomed to the darker image. So it was nice to be shaken out of my mist. Pure bright color was a staple of a lot of my work in the 80's, pretty much all of the rainbow colors in  one painting, but I seemed to have had a kNak to combine and blend them in a way as not to be garish I was told once.
When I took a photo in B & W I was surprised at the melding of the foreground tree with the background sky and this combined with the shapes in the sky was like a memory of seeing nature on magic mushrooms. So no need to take it when you've got the painting.
Ring or e-mail me if your interested. (shipping included)   nak@mts.net   or   204.956.7675 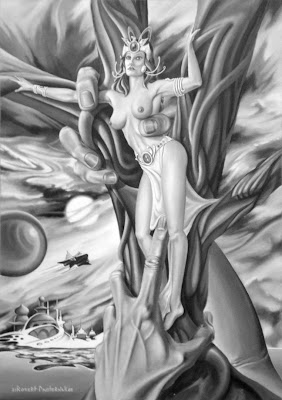 Posted by Robert Pasternak at 7:08 PM

Here are a couple newest 'works' I guess you can say. I don't know what I am going to do with the HeyPal one which I thought of only yesterday on the way to the studio. Maybe do a screen print for it or make a magazine-like ad with some copy that I've already come up with or just send it out there.
As with a lot of my ideas, something just clicks in my head. I wouldn't really say that it's like a Light Bulb over my head but rather more like a Thousand Russian Ghosts spinning the world in order to screw in a light bulb inside my head. There is often a surreal twist that goes astray after just seeing something. The ADMIT IT ticket idea was no different. Just working at my desk which just happened to have an Admit One ticket on it (which was probably there for weeks) when suddenly....Bang! I heard the noise of that light bulb crashing on the floor. Maybe I was guilty of something at the time or perhaps it's just a state of mind. Solid state? I think I'm still operating on the old tubes.
These tickets I'm just manufacturing myself in various sizes (the 12 inch ones are pretty cool) with slight design variations. From printing, cutting and perforating, I'm doing it all at the Nakfactorium. I have a 40 inch long strip of three tickets which is pretty enjoyable to see. Each ticket of course has a different number. 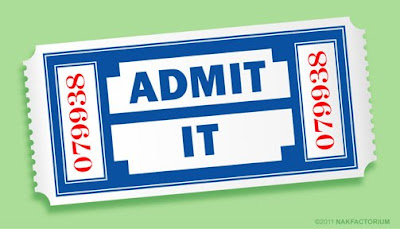 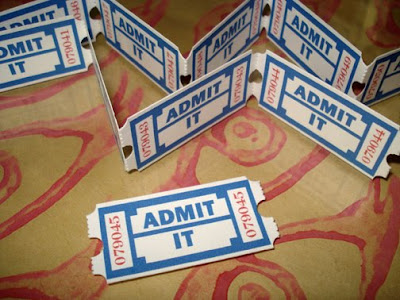 Posted by Robert Pasternak at 2:45 PM