PREVIOUSLY - while settling in to the new...

LOGOS
... new Split Studio Space, the SSS. I draw, assemble and digitize in one space and I paint in another. The light is fantastic in one and not so light-fantastique in the other. One of these spaces has a huge graphic on the wall, an artifact from the seventies I am sure. I have recreated it here and I am using it on my business cards. It seems to suit me and my space well.
ALSO
Many new paintings have emerged from the new SSS. See the Painternak link to the right.

********************************
THE HAND SEES
The other day I was in my favorite antique & funk shop and came across a self portrait  I did 29 years ago. I had given it to my girlfriend at the time as a Christmas gift. It was so nice to see it again! I was surprised at how vibrant it was and that It was well taken care of. I wonder what happened? I hope that the other paintings that I gave her and her family are still alive and in good care. 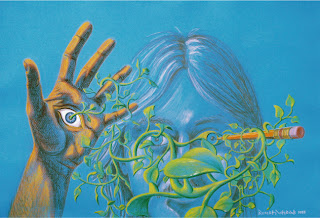 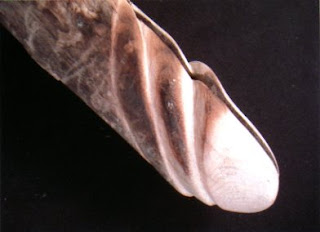