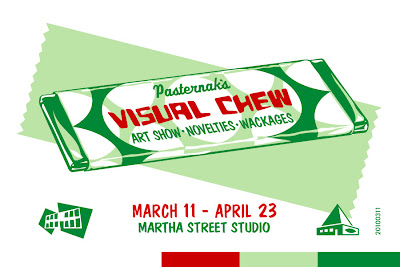 It's Time for a new Show of craziness and fun and multiple visual packs of Whollop. ZAP!
I've been super busy getting this show together. New products and Novelties will be unveiled as well as many new silk screen prints and one-of-a-kind prototypes. You've seen some items here like the Sgt. Smokes and Bacon Bookmarks. Well there will be plenty more as well as a 25 cent gumball machine dispensing Secrets of the Universe and a 2 dollar capsule machine with a variety of novelty fun. Read more below.
Opening reception Thursday March 11, 5:00 - 8:00 pm 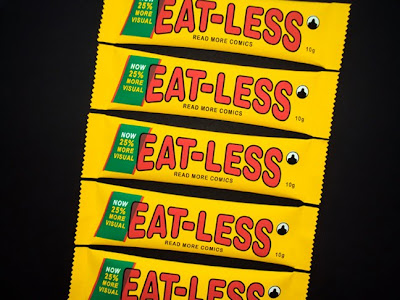 Pasternak’s VISUAL CHEW:
Original Novelties, Art Multiples and Packaged Thoughts
March 11- April 23, 2010
Martha Street Studio
11 Martha Street, Winnipeg, Manitoba
Robert Pasternak's debut print-based show now at Martha Street Studio
POPS with inventive new visual twists and turns: featuring novelty art
multiples, imaginative packaging and eye-popping graphic design. The
show titled VISUAL CHEW - brings together for the first time ever - a
diverse selection of Pasternak’s imagined products from the past ten
years. Martha Street Studio will be selling these Pasternak products
including prototypes, silk-screen prints, colorfully-crafted boxes and
sculptured-novelties - from Bacon Bookmarks, and Micro Dot
Monsters to Pollick Lollipops produced by the Jackson Candy Co.
THRILL in amazed puzzlement behind the questionable urge to create
tangible toy titillations that actually work wonders like Oh you think
it's funny? But it’s Snot! - Which are pre-packaged novelty boogers
“ready to roll and flick.”
Gaze at comic-book inspired curiosities filtered via hard doses of
modern wartime reality in nicotine time! ZAP! How about a pack of
Sgt.Smokes? Fully poseable, used cigarette butts that look like a
cheap packaged toy found at a dollar store - but WHAM - the novelty
idea of kids actually using these to mimic the army sergeant as he
blasts a few rounds of ammo is totally absurd!
Maybe you have restless fingers? Well what you need is Robert
Pasternak's FUM GUM - Fun for Your Fingers - a Bubbled Double-sized
novelty chunk of modeling clay that comes with Ummm… a Bazooka
Joe-ish, proto-Pud-type insert! Fun activity for your fingers! So real
- or rather surreal - that if you did not look twice you would just
POP it in your mouth and start chewing.
“All of this started with making mini comics,” says Pasternak as he
tinkers over the next possible addition to VISUAL CHEW. “This was a
very economical way of publishing your art, and making it accessible
to give away or sell inexpensively. I then started to think of other
ways to package my art, and this led to creating brand new ideas for
Pasternak products. Being a surrealist, I love the absurdness of
taking a ridiculous notion and finding a way to package it. To make it
look slick, as if it exists in the thousands and it would only carry a
39-cent price tag. I also love candy, and candy packaging, so you will
see many references to both existing, and nostalgic candy-inspired
packages at VISUAL CHEW. My NAKFACTORIUM turn-style toy capsule
gumball machine will even be dispensing some of these art items for
only 2 dollars a POP!”
ROBERT PASTERNAK
Is a Winnipeg-based, multi-disciplinary pop surrealist who moves
seamlessly from metaphysical paintings and science-fiction
illustration to hand-processed film, collage with found materials, to
imaginative product-design. From High-Sci-Fi to Low-Scrounge comix,
Pasternak has exhibited his work extensively in his 26-year art
practice, and Nak’s illustrations have graced album covers, science
fiction magazines, and literary book jackets. His exhibits are always
different in that they usually highlight one of the multitude of areas
of visionary visual work that he is continually juggling and adding
to.
In addition to his art practice, Nak has worked as a production artist
for silk screening and cresting shops, as an art director for Zygote
magazine, as a digital colorist for a multimedia firm, as a creator of
hundreds of posters and product fliers, and as a freelance graphic
designer. Guided by a mix of new age philosophy, comic book ambition,
and a fundamental belief in the interconnectedness of events,
Pasternak creates an exciting makeshift universe filtered by a type of
comfortable visual osmosis where his work and audience can meet. His
personality and his art studio both reflect this practice; filled with
salvaged material, vintage memorabilia, and a zillion projects waiting
their turn on the Pasternak production schedule.
Posted by Robert Pasternak at 10:42 PM