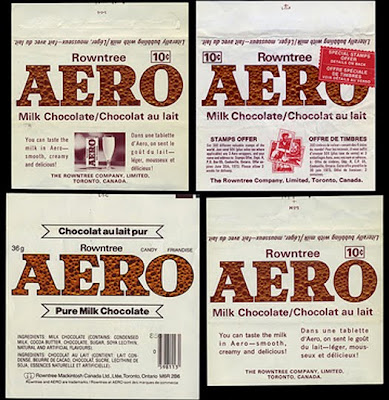 UPC bar codes began widespread use in the beginning 1980's. 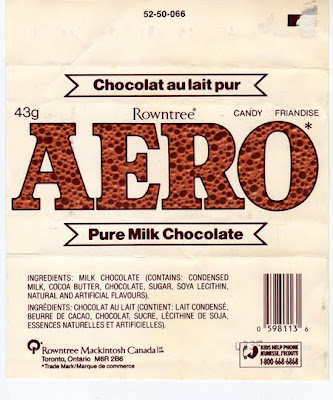 52-50-066 This is an Aero Chocolate Bar wrapper from around 1987. This same design had been used since the 1960's with virtually no changes. Aero was originally made by Rowntree (since 1935) but merged with Mackintosh in 1969. The bars were previously 36 grams. 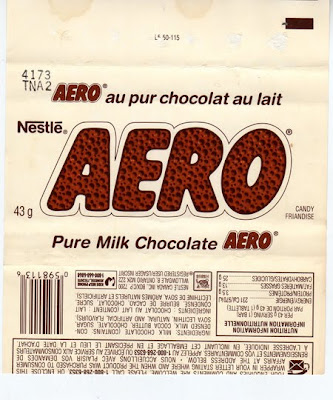 L5-50-115  In 1987 Rowntree Macintosh went public and in 1988 was bought by Nestle with an offering value at 4.55 billion dollars.  We now see the Nestle logo up front on the wrapper. In the following wrappers watch how the logo changes.
If you look at the top of the wrapper there is a 7 digit number. The last three numbers seem to change with every slight change in design or alteration of the printed wrapper. I have a Caramilk wrapper where there is a single increment number difference and the only foreseable difference was a switch in the order that a couple of the ingredients appeared in.  So since the time of the wrapper shown above this one, there has been 49 changes to the wrapper. I am only showing a sampling of major changes in the design appearance of the wrapper.
Oh yeah, the Aero lettering design had finally changed after all those years and Nestle cut a gram of chocolate out.
Is there a difference between Milk Chocolate and Pure Milk Chocolate? 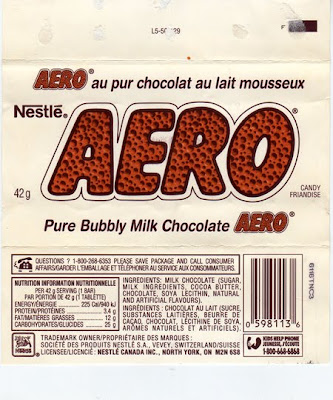 L5-50-129  Here we go with the Bubbles in the phrase Pure Bubbly Milk Chocolate. 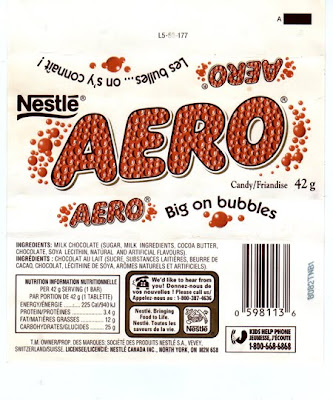 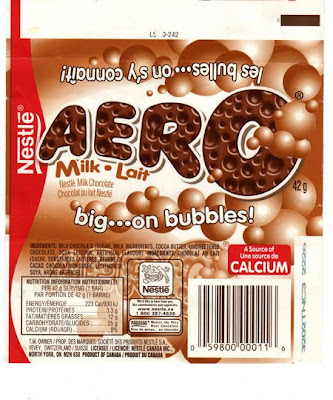 L5-50-242   I just love how the bubbles have now exploded throughout the design. I absolutely love this one. Why the pause after Big........? Again a new Nestle logo. 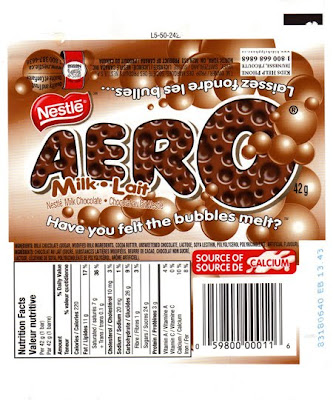 L5-50-242  (Why is this number the same as previous wrapper?) There are many changes again. The bubble slogan has changed and the Nestle logo has changed again! This wrapper from March 2010 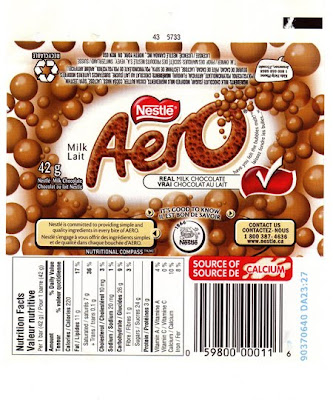 Huge overhaul of Aero lettering style. (April 2010)I was not a fan at first, but it's growing on me. The number at the top is a whole new ball game. The slogan 'Have you felt the bubbles melt' has been shoved to the sidelines. Will it be totally gone next time around?

Posted by Robert Pasternak at 5:20 PM